Sangi'lak's existence has been minute ever since is creation, but the mountain family pack has managed to prosper over many circumstances. Keeping to caring for their own before others, they were able to form a tight knit family, therein able to secure safety and nourishment for the collective to grow. Despite the leaving of one of its leader Jaden before the turn of the year, the family managed to keep itself grounded through the shared efforts of its members and the support of their neighbors of New Dawn. Though not all surrounding the Nomads were as accommodating to the Family's occupation.

Regardless, bonds were formed with the leaders of other packs, encouraged by personal relationships cultivated by its leaders before and after is founding. And from that careful tending came the Alliance with New Dawn; a bond solidified by X'yrin's birthing of Zalen's pup, Verya. From that birth, Sangi'lak saw its first pups born in addition to the growing numbers of the family. Though the pack suffered a loss with the death of its first Diplomat and Lambda, X'ies, setting the pack at a standstill for some time before X'yrin continued her role as sole leader of the Family.

But as the year comes to an end, the path before them family looks anything but bleak, especially with the able hands (and newly formed ones!) of its members to see the greatness of the Nomads to come to fruition. 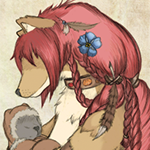 "There is only the Family...no one else"